Home Nutrition The Most Common Nutrient Deficiencies in Women

Studies have shown that women’s food consumption is strongly influenced not only by their diet, but also by factors such as their economic status, social and cultural environment, personal habits, age, level of activity and genetics. Experts believe that of the most common nutritional deficiencies (although other deficiencies are still possible and somewhat common) in women, these are the ones that occur:

Nutrient and vitamin deficiencies in women

It is estimated that about 30% of women are deficient in one or more essential vitamins and minerals, and for many women the risk increases with age.

Another terrible discovery? Estimates show that about 75 percent of women are likely to have a nutritional deficiency if no additional multivitamins are available.

What vitamins are women missing? Here are the nine most common:

Iron deficiency and anemia are the most common nutritional deficiencies in the world, especially among women. According to the World Health Organisation, this shortage not only affects a large number of children and women in developing countries, but it is also the only nutritional deficit that also occurs in industrialised countries.

It is estimated that as many as 30 percent or more of the world’s population is anaemic, often as a result of low iron levels. Low iron/anemia levels can lead to fatigue, hair loss, muscle weakness, brain fog, headaches, dizziness and other problems.

Elderly women with anemia, vegans and vegetarians need to work with their doctors to make sure they get enough B vitamins and iron, because they are most at risk of these deficiencies.

Young people are most at risk of iron deficiency, and women generally need to ensure that they consume enough iron, as the need for iron increases during menstruation due to blood loss. In addition to taking iron supplements, one way to increase iron absorption is to eat a variety of iron-rich foods and foods that promote better iron absorption (e.g. foods that contain vitamin C).

Vitamin B12 deficiency can contribute to symptoms such as balance problems, constipation, weakness, dry skin and cognitive changes.

B12 plays an important role in your health by producing hemoglobin, part of the red blood cells that help your cells get the oxygen they need for life.

Vitamin D deficiency is one of the most common diseases in the world among both adult women and men (as well as infants and children).

Vitamin D can be produced in our body if we are exposed to a sufficient amount of UVB rays from the sun. The most important role is to regulate calcium absorption.

People with vitamin D deficiency are unable to assimilate this calcium, which makes it difficult to build strong bones. However, Vitamin D also plays another important role in general health, including supporting the function of the bone, cardiovascular system, testosterone and immune system.

The National Institutes of Health states that 35% of the American adult population has a vitamin D deficiency.

Try to get 10 to 15 minutes of sunshine per half day for the face, hands and hands without sunscreen. Depending on the season, the width and pigment properties of the skin, this may be sufficient to maintain a healthy vitamin D content.

Remember this: If your skin turns pink, you get too much sun.

Girls aged 9 to 18 and women over 50 are believed to have a low calcium content.

In general, many people still do not consume enough calcium between food sources and calcium supplements for reasons such as absorption problems and calcium loss through meditation and intense exercise.

For postmenopausal women, it is particularly important to avoid calcium deficiency, as this can contribute to bone loss and increase the risk of fracture/osteoporosis.

Lactose intolerant women and vegans can also suffer from calcium deficiency because they avoid dairy products, which are among the most suitable food sources. The amount of calcium absorbed from the digestive tract can be influenced by other factors, including advanced age (over 70 years) and low vitamin D status (vitamin D is needed for good calcium absorption).

The need for many micronutrients increases when a woman is pregnant – especially nutrients such as folic acid, iron, calcium, zinc, magnesium and iodine.

In order to reduce the risk of side effects due to folic acid deficiency, the American Thyroid Association also recommends that all prenatal vitamins contain 150 micrograms of iodine, which should be taken during pregnancy and after childbirth during breastfeeding. 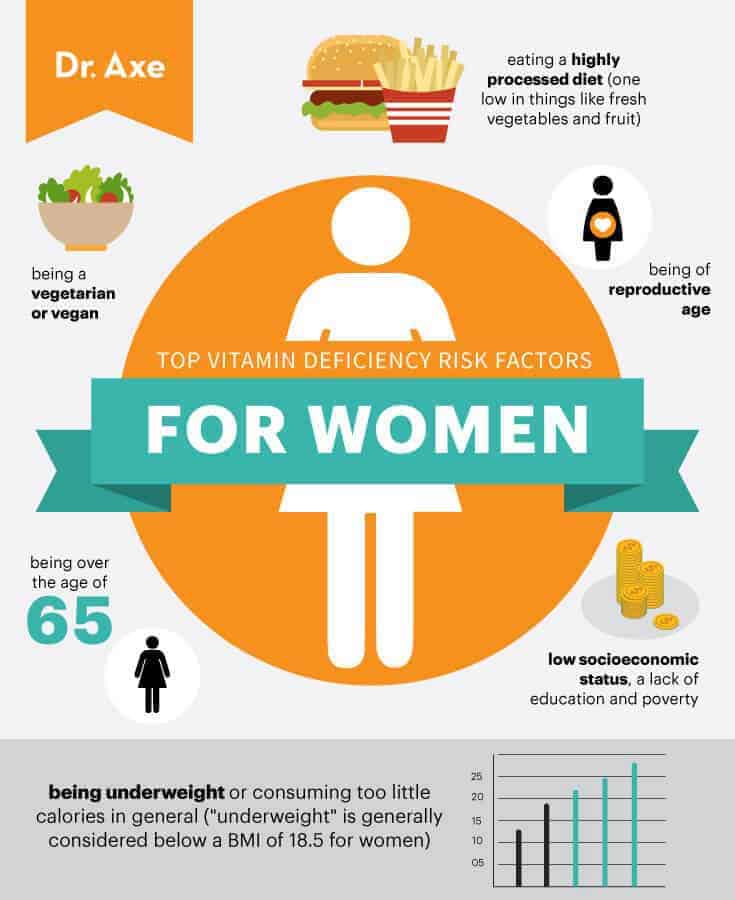 In the United States, the National Institutes of Health have determined through dietary studies that many adolescent and adult women do not consume potassium regularly enough. Therefore, the US dietary guidelines for 2015-2020 define potassium as an important nutrient for public health.

Insufficient potassium intake can contribute to problems such as changes in blood pressure, increased risk of kidney stones, poor bone circulation, increased calcium excretion from the urinary tract and changes in salt sensitivity.

In addition to eating foods that are too low in potassium, low levels can be associated with medication, diarrhoea, vomiting, poor kidney function, laxatives, inflammatory bowel disease and heavy sweating. Severe insufficiency (hypokalemia) affects up to 21% of hospitalised patients, often as a result of diuretics and other medications.

It is assumed that more than 50% of people with clinically significant hypokalemia also suffer from a magnesium deficiency because potassium and magnesium interact in different ways.

According to the Centers for Disease Control and Prevention, women aged 20 to 39 have the lowest iodine content in their urine compared to all other age groups.

The thyroid gland needs iodine to produce the hormones T3 and T4, which help control your metabolism.

Most people who follow a western diet consume large amounts of iodized salt, which is contained in packaged foods and refined cereal products and to which iodine is specifically added to prevent deficiency symptoms. But the best way to get the iodine you need is to find it in iodine-rich foods, such as vegetables and seafood, which are the main natural sources of this nutrient.

Preventing iodine deficiency helps protect you from diseases such as hypothyroidism, goitre, fatigue, hormonal imbalance and problems during pregnancy.

Magnesium is one of the most important minerals in the body, but also one of the most common deficiency symptoms. As an electrolyte, magnesium helps regulate calcium, potassium and sodium and is essential for more than 300 different biochemical functions in the body.

There is worldwide evidence that soil depletion has reduced the magnesium content of many crops compared to previous generations – and that diseases such as indigestion, intestinal transit syndrome, chronic stress and the constant use of medication can reduce the body’s magnesium content.

Leg cramps, insomnia, muscle cramps, anxiety, headaches and digestive problems such as constipation can be signs of magnesium deficiency. The risk of deficiency can be even greater for older women.

Studies have shown that many older people do not eat a magnesium-rich diet and are also subject to reduced absorption of magnesium from the intestines, reduced availability of magnesium in the bones and excessive leakage of urine.

If you eat magnesium-rich foods, such as green vegetables, seaweed, beans, nuts and seeds, make sure you have enough, because it can sometimes be difficult to put magnesium in a multivitamin supplement for a whole day.

They need to keep each other in balance to keep the heart, brain and immune system as healthy as possible. The best ratio is about 2:1 between omega-6 and omega-3, which helps prevent diseases such as arthritis, heart disease, Alzheimer’s disease, depression, etc.

Eating fish caught in the wild several times a week or taking a dietary supplement of about 1000 milligrams per day is the best way to overcome the inflammation and obtain sufficient omega-3 fatty acids.

How do you know you have a vitamin deficiency?

There is a wide range of symptoms that can be associated with vitamin and mineral deficiencies. The most common signs of nutritional deficiencies in women are

When a healthy diet is sufficient compared to.

What causes a vitamin deficiency? Does it have to be because of bad food?

This is what we know about women at risk of a vitamin deficiency:

As a woman, you are likely to ingest small amounts of some important nutrients if they apply to you:

Even if you feel you are on a very strict diet, some women are more likely than others to suffer from a lack of essential vitamins. These are some of the special circumstances that make a woman a good candidate for the daily use of a high-quality food supplement based on multivitamins to prevent common deficiency symptoms:

The best protection against nutrient deficiencies is to generally consume sufficient calories, avoid disturbances or unusual diets, not to exaggerate or start learning, and to focus on a varied diet with few empty calories.

This means avoiding the addition of sugar, refined cereal products, packaged snacks and most refined vegetable oils. Try to reach the maximum explosion for your skin by making yourself count calories, eating lots of fresh vegetable food, pure protein food and healthy fats.

Lack of women in pregnancy

Researchers stress that for women of childbearing age who are preparing to have children, adequate nutrition before, during and after pregnancy is an important part of overall reproductive health. It is therefore particularly important that pregnant women receive sufficient nutrients, which is often the case for women.

Prevention of malnutrition during pregnancy and breastfeeding: